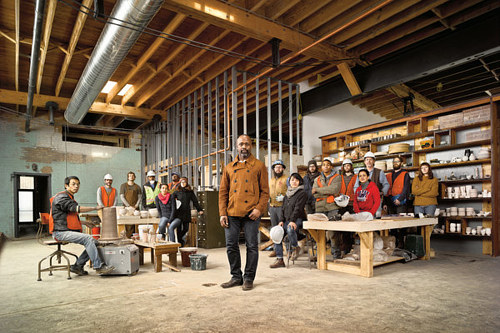 Our Studio Sunday artist this week is Theaster Gates. Gates was trained in pottery, and though he now works in a wide variety of media creating a number of different types of artworks, he still uses ceramics and pottery frequently in his work. The studio pictured above is Gate’s pottery workspace, located in what used to be a beer warehouse in Chicago.

As the picture above shows, the artist employs a team of staff and art technicians to help him produce his works. These particular artists help him create ceramics and pottery works in this studio space. Gates uses pottery to manipulate space on a smaller scale while also creating his building installations.

Growing up in a poor neighbourhood and seeing firsthand the effects of unemployment and poverty Gates is highly interested in education and bringing art to everyone regardless of class. As an arts administrator at the University of Chicago, he seeks both through his work and his professional life to bridge the gap for students who have artistic interest and talent but can’t afford to attend the “prestigious” university.