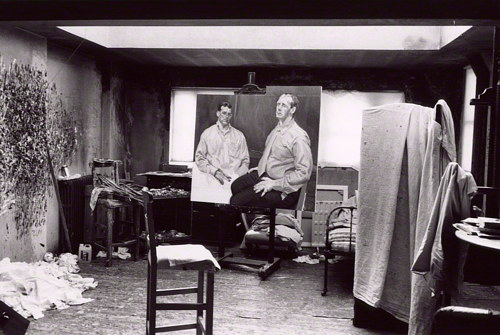 Our Studio Sunday artist this week is Lucian Freud. Lucian was born in Germany but moved to Britain prior to World War II, where he began pursuing his figurative painting career.

Known in his later career for painting portraits and full-body nudes, generally in deep earthy skin tones, using thick, heavy layers of paint. His subjects often have serious or neutral faces, and combined with the overall tone of the paintings, are sometimes uncomfortable to look at. The works create an almost off-putting impression of the relationship between artist and model.

Freud’s studio space, pictured above, appears small, almost cramped, and rather dimly lit. I wonder if some of the earthy colouration of many of his paintings was due in part to trying to match the skin tone of his models in this lighting. I find the paint-covered wall on the left hand side of the room fascinating. It must represent many years of the artist testing colour or wiping excess paint off a brush. All these swipes of paint have, over time, turned into what looks like it could be a bizarre growth of mold. Contained within this dark mass is a history of a huge array of Freud’s paintings. In the back of the studio, behind the easel, a bed is visible. A number of Freud’s works depict models reclining on this very bed. It’s possible that the artist himself used it for sleeping after a long day spent working in the studio. The utilitarian nature of the room may seem uncomfortable at first, but Freud was certainly able to use the space to its utmost potential.