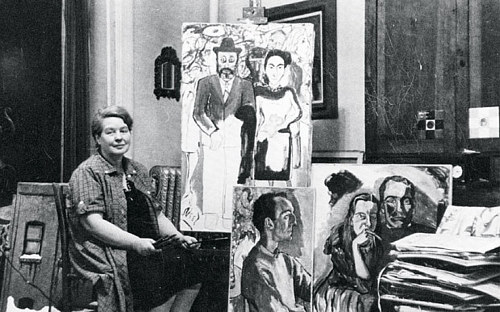 Our Studio Sunday artist this week is Alice Neel! Neel was an American painter who became known for her portraits of friends, lovers and family members. Her portraiture was done in a loose, almost naïve style and was especially renowned for being slightly eerie, with off-kilter perspective and blank expressions that lent her figures an almost alien appearance.

In the above image, a few of Neel’s paintings are visible – I’d assume these are probably works in progress. I like the contrast between Neel’s smiling, cheerful expression and the expressions of the figures in her paintings. The rest of the studio seems quite cozy, and a little dark, very much a space for getting totally lost in the act of painting.

I wonder about that stack of papers in the foreground on the right side of the image. Are these sketches that Neel has done? Studies, or paintings on paper, perhaps? Maybe inspirational materials and cut-outs from magazines. There are a couple things hanging from the walls in the studio – one looks like a small mirror and the other perhaps an artwork. Perhaps Neel kept some work by a fellow artist in the space for inspiration.

Neel’s tumultuous life informed the bleak and introspective nature of her figures. She tended to paint her figures with wide, shadowed eyes and blank expressions – giving viewers the impression that they were being stared at by the paintings themselves. This sense of eeriness reminds me of the work of Francis Bacon or Lucian Freud.