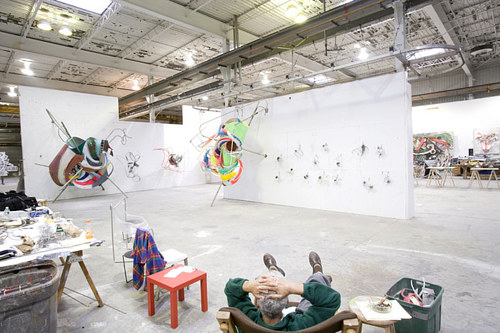 Frank Stella is a well-known American painter most commonly associated with the abstract expressionism and minimalist movements. While his earliest and most well-known works were mainly two dimensional, in recent decades the artist has branched out into large-scale sculptural works that echo geometric and architectural forms. Stella’s massive studio is located in a warehouse in upstate New York.

While the artist’s works have evolved significantly from the geometric paintings that he was known for in the 60’s and 70’s, Stella hasn’t lost any of his artistic persona, pictured here sitting in a recliner in the studio, leaning with his hands on his head, presumably plotting his next art move.

Given the huge scale of the artworks he’s producing, it’s a good thing that Stella’s studio is so massive! It’s also impressively bright and looks relatively clean and new for a place of art-making. The works that Stella is currently creating are fabricated from metal and other materials. Reportedly, Stella’s studio houses a 3-D scanner that allows him to scan the mock-ups of a given piece and send the exact dimensions and shapes to an independent fabricator.

On the far wall in the above photo, a series of small mock-ups are arranged beside the larger sculpture that they serve to represent. It’s these smaller mock-ups that Stella likely spends a lot of his studio time building, perfecting each angle so that they can be scanned and produced on a larger scale.

Stella is considered an important figure in the history of Western contemporary art. His practice intersects with that of other artists of the same era such as Sol Lewitt and Claes Oldenburg.