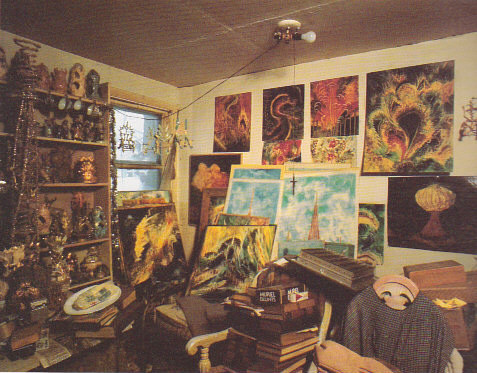 Eugene Von Bruenchenhein was born in Milwaukee, Wisconsin in 1910, and lived and worked there for his entire artistic career, producing a huge amount of paintings, sculptures, and other mixed media works over the course of 50 years.

The artist worked as a florist and a baker for a time, before moving into a house with his wife in the late 1930’s and beginning to devote the majority of his time to artistic production. The house where Bruenchenhein lived – shown from the interior in the above and below photos -- was a source of inspiration for the artist, and became a sort of artistic installation in its own right.

In the images here, it’s clear that the artist seemed to devote most of his time and most of his space, as well, to artwork. The room seen in the photos was apparently his primary studio space, and remains packed with art objects – sculptures, drawings, and paintings – even many years after his death.

Despite the cramped atmosphere, Bruenchenhein’s home seems pastel colored and friendly – somehow warm. It’s not quite like the spaces of Francis Bacon or Lucian Freud, which are certainly cozy and cramped but lack that sense of inviting friendliness. There’s a very hobbyist feeling to Bruenchenhein’s space, and I get the sense that the artist really had fun with what he was doing.

Bruenchenhein’s house, painted in a variety of pastel colors, still stands in Milwaukee. A self-taught artist, he achieved little fame during his life, but his work has recently been catalogued and exhibited in a number of posthumous shows. 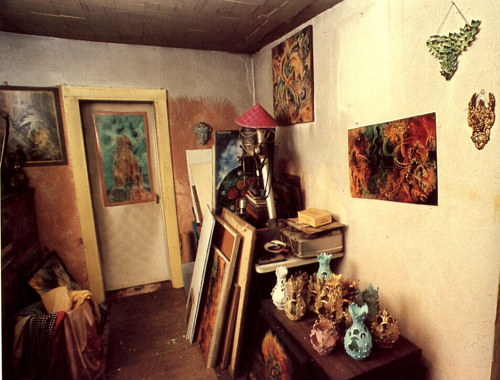