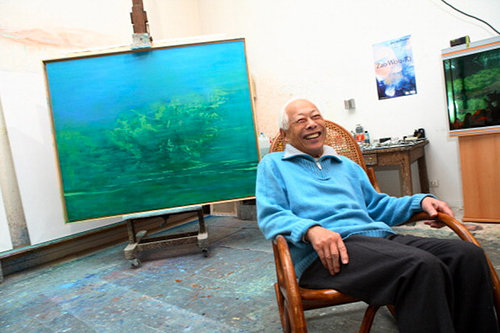 Zao’s studio looks quite modest in this photo – but large enough to accommodate a few of his large paintings in process. I also love that he appears to have a fish tank in his space – I can imagine the sound of a bubbling tank would be somehow peaceful, and having fish both for inspiration and company would cheer me up if I was stuck in the studio all day. The floor of the space appears splattered with paint, a nice reminder of the many great works that were painted here.

Zao was born in Beijing, China, in 1920. While living in China he studied painting and calligraphy from a young age, learning traditional Chinese art techniques which would come to influence his later style. Later, in 1948, Zao traveled to France with his wife and soon became part of the Academie des Beaux-Arts, a society for important cultural producers in Paris. Early on in France, Zao’s works were seen by other up-and-coming artists such as Miro and Picasso.  Zao’s career grew into a long and fruitful adventure, as he traveled across the globe meeting other artists and experimenting with his artworks. He died at home in Switzerland in 2013.