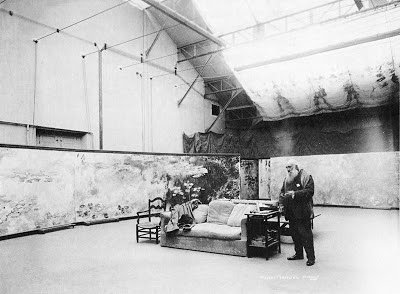 Let’s look at the beautiful France studio of Claude Monet. The father of impressionism as we know it today, Monet took much of his inspiration from the landscape around his home, and took great pleasure in tending his large, wild garden. Monet spent his formative artistic years in Paris, close to the Louvre and to many other artists who would become famous alongside Monet.

Monet’s studio is large and somewhat sparse looking. I love that he had a full sofa in there – along with 2 chairs. He could have guests in to look at his paintings or chat – it would have made a great studio for visiting! Monet’s paintings are so huge that you’d have to sit back and far away to take them all in.

Monet often worked en plein air as well as indoors in his studio. Located in Giverny, France, the studio opened up into a sitting room that was taken up, on one side, by a huge picture window looking out onto the iconic grassy landscape that appears in so many of the artist’s paintings. As Monet became more successful in his artistic career, he was able to put more of his time and money into maintaining his studio, house and the surrounding garden. Though he eventually hired a team of gardeners to help him maintain it, the garden was his crowning achievement and his ongoing project.