Nate Burbeck’s paintings take everyday scenes as their subjects, often featuring rural settings, cars, and small town dwellings in landscapes across the Midwestern United States. There is something vaguely melancholy about Burbeck’s works, like a certain sense of disrepair or entropy in the images of deserted streets and graffiti on bridges.

Burbeck paints realistically, capturing minute details of each scene such as the rust on old cars or the cracks in concrete beams on bridges. Many of his paintings seem dimly lit, as if the subjects are being captured at twilight or dawn.

The artist also recently participated in a collaborative projected entitled Re-collections, where the nature and utility of souvenirs was explored by means of physical installation and the projection of nostalgic images. Burbeck was born in Minnesota and has exhibited his work in New York, Minnesota and Nebraska among other states. 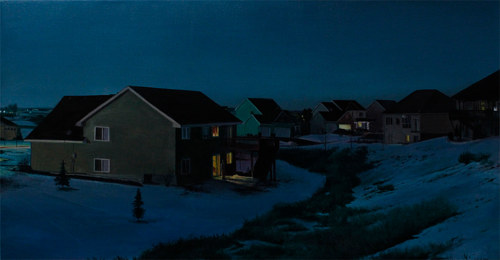