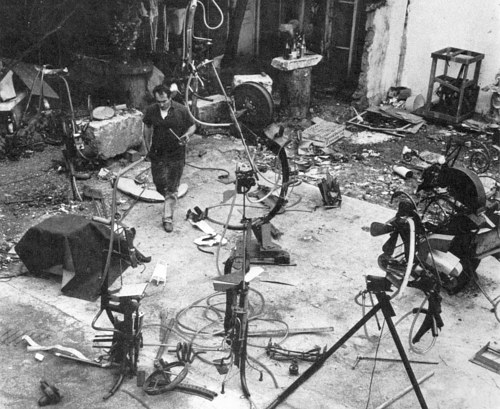 Our studio Sunday artist this week is Jean Tanguely. Tanguely was a Swiss painter and artist who became a part of the Dada movement after moving to France in 1952. He became well known for his artworks that critiqued the early beginnings of mass production following the industrial revolution. In particular, the artist created works that took the form of kinetic machines that served no real purpose, as well as several sculptures that were intended to self-destruct upon being set into motion at an exhibition.

What a mess Tanguely’s studio is! It’s sort of encouraging to see – I have to assume that Tanguely, pictured above, is so absorbed into the making of his assemblages that he has no time to clean the studio. Given the nature of the artist’s works, a little mess probably helps provide inspiration.

There’s a whole lot going on here. The materials – metal rods, pieces of wood, construction elements – have an industrial feel to them, creating the appearance of a welding or woodworking shop in the midst of a hard work day. Certainly some of the objects pictured here are tools or machines for working metal, while others are sculptures in progress. The look of the studio sort of reminds me of that of Eva Hesse’s early practice. There are so many bits and pieces scattered about that I wouldn’t be able to make heads or tails of it – but the artist seems to know what he’s doing!

The engineering aspects of Tanguely’s work is clear in this studio photo. Considering he was one of the first artists to begin exploring the idea of moving artworks, there would have been an intricate mechanical aspect to much of the artist’s work. Kinetic sculpture is an art form that many contemporary artists continue to explore today.