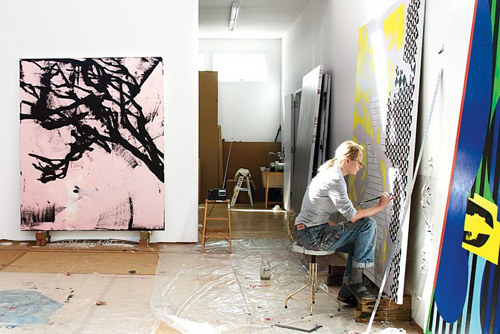 This week’s Studio Sunday focuses on the work space of Charline von Heyl. Charline moved to New York from Germany in 1994 after her first solo show in New York. The artist’s style is referential to many different art movements of the past and contemporary art history, though it never seems as though she is copying or appropriating. Painting exclusively in abstraction, she resists having a narrative applied to her works, while her style is constantly evolving and changing.

Charline’s studio is bright and spacious. In this photo it looks like there is a smaller nook of sorts in the back, where the artist has a desk and some unpainted surfaces stored. Two small windows are back there as well, letting in plenty of natural daytime light – though the lighting is helped with fluorescent tubes on the ceiling.

It looks like most of the paintings that the artist was working on when this photo was taken are propped up on wood blocks, leaning against the wall. Given the size of the works, it would probably be impractical to place them on an easel, so this seems like a good compromise. The blocks keep the bottom edge of the painting from sticking or smearing on the floor, while the painting remains vertical and fully accessible.

Von Heyl also has a radio on the stool in the corner – perhaps she listens to music while she works. Maybe some of her ideas are influenced by music, like the work of other artists such as Marilyn Nelson and Christian Marclay. I know I often find inspiration for work in a well-timed bit of background music. The artist has noted in interviews that she has a short visual memory – the almost overwhelming diversity of her style may be because she moves so quickly from idea to idea, not getting stuck in one system or way of working.