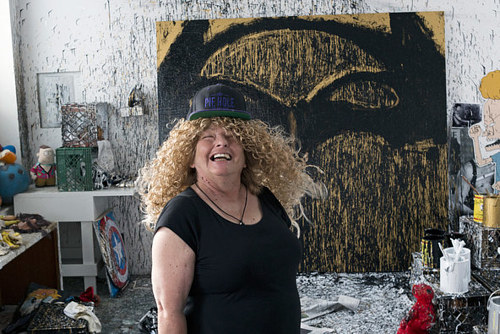 It’s Studio Sunday, and we’re taking a look inside the extremely paint-splattered studio of Brooklyn artist Joyce Pensato! Pensato has lived in Brooklyn, New York, for her entire life, and continues to be based there even as a successful artist. She is well-known for appropriating well known cartoon characters, turning them into bizarre works of modern art that combine a dark, sludgy aesthetic with a palpable edge of humour.

While here she is seen in her designated studio space, Pensato’s “studio” has been known to pop up in whatever gallery she is developing a show for, as she often paints directly onto the walls of the gallery. Modern and classic cartoon characters including Homer Simpson, Mickey Mouse, Batman and Donald Duck have featured prominently in a large number of her portraits. A recent exhibition at the Lisson Gallery even saw Pensato using stuffed animals and toys in an artwork, creating an installation in which dolls of famous characters were placed in the centre of the space on crates, stools and apple boxes, then splattered with black and white paint in Pensato’s trademark manner. In the above photo, stuffed dolls flank the painting that Pensato is working on, and they remind me a little of the studio of fellow painter Paula Rego.

The artist’s studio very much reflects her painting style. She uses enamel paint, splattered and thrown against a vertical surface in a way that is definitely reminiscent of Jackson Pollock, or Jeffrey Newman. The faces of her characters are simplified into two tones, and where she hasn’t smeared the paint into opacity the background is busy with paint spatters. Naturally, the walls and floors of her studio are coated in many layers of paint splatters. Pensato’s studio would be a really fun, inspiring place to work - though you’d have to make sure to wear clothes you weren’t afraid to get dirty!