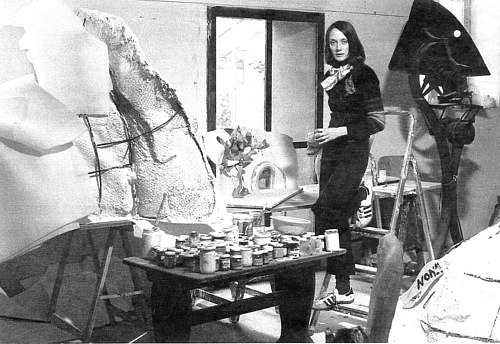 It’s studio Sunday and we’re looking inside the work space of Niki de Saint Phalle. Niki was an artist from France whose work spanned many decades and many different media, notably becoming architectural and sculptural while still retaining an element of bizarre fantasy.

De Saint Phalle’s studio is pictured above as a place of wide experimentation. She seems to be working on several large, sculptural forms as the picture is being taken. I like the way that de Saint Phalle is standing on a step stool or a small ladder in the photo – it’s as if the artwork has taken on a mind of its own and she barely has the equipment to keep up with it! While the photo is in black and white, the number of paint pots on the table seems to say that de Saint Phalle’s studio was a colourful place. As she experimented more and more with sculptural forms she likely would have expanded the space.

In the early 1960s Niki became known for making her shooting paintings. She is pictured below creating one of these works. The paintings are composed by loading a rifle or a shotgun with paint capsules and shooting them at a surface. The uncontrolled nature of the process lends an interesting look to the finished pieces. It also usually required that de Saint Phalle complete the works outside. Sort of an early precursor to paintball, with a slightly more artistic inclination.

Niki was married to Jean Tinguely from 1971 until Tinguely’s death in 1991. Afterwards, de Saint Phalle made kinetic sculptures in his honour. 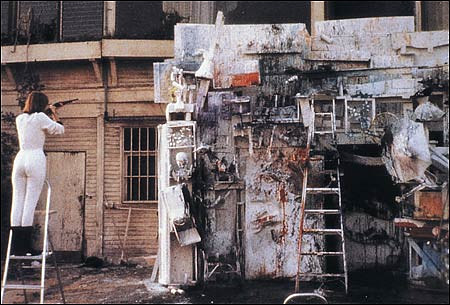