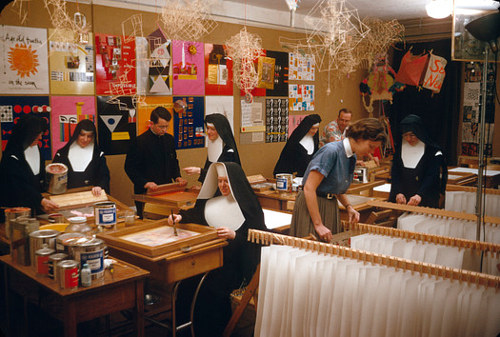 Sister Corita Kent moved into a convent immediately after graduating from high school in the 1930’s, and later discovered her love of bright, graphic pop-art, becoming a prolific artist in the 1960’s after being inspired by the work of Andy Warhol.

Kent produced most of her works using print making techniques. As an art teacher at the Immaculate Heart College in Los Angeles, Kent worked out of a studio that was shared with a number of students at any given time. In the above photo the studio looks like a busy but inviting places, crowded with artworks by students and individual desks for producing work. Kent made particular use of silkscreen techniques, pictured above.

The artist’s works were influenced by her fellow pop-artists of the sixties, like Andy Warhol, Bridget Riley and Roy Lichtenstein. Kent in particular used advertising logos and slogans from consumerist culture, repurposing them to fit the agenda of Catholicism, which was trying to revamp its image for a more modern audience at the time. Kent’s printmaking works usually had some sort of spiritual message which the artist conveyed through smaller, hand-painting text that accompanied the advertising slogans.

With all the print and paper works on the walls, I wonder if the school studio had available a library of magazines or newspapers from which Kent was able to draw her slogans and logos. The artist would likely have created stencils for the screening process, and in this photo it looks as though she is hand-painting one of the screens. Kent’s works were often layered, with multiple words and phrases blending together to create a visually stimulating whole.