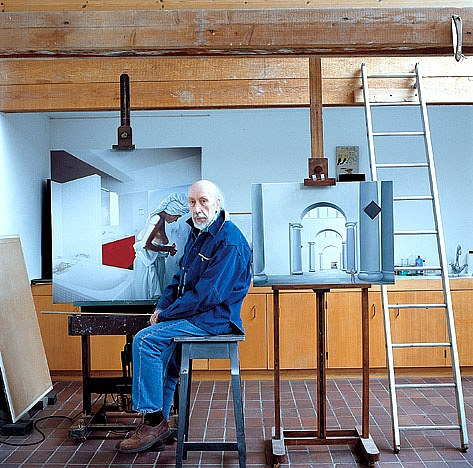 Happy Sunday! Pictured above is Richard Hamilton, sometimes known as the intellectual father of pop art. Working mainly in painting and collage, the artist was known for being forward-thinking in terms of aesthetics. His studio, in Oxfordshire, England, looks relatively small in this photo but given the scale of the artist’s works, it was probably just the perfect size.

The studio also looks quite clean, which is rare in the studio of a painter! Beside Richard in this picture is a ladder that goes up to an unseen higher level - perhaps a library, a space for collage materials, or more painting space. I like the blue walls and darker tiled floors of the studio, they’re something of a departure from the usual plain white surfaces of many modern artist’s studios.

The wood cabinets and accents give it a homey feeling, something like what one would expect from a basement studio space. I don’t see any windows from this angle, so I wonder if the studio was not lower than ground level. Behind Hamilton, the room seems to have a basic counter and kitchen sink, providing everything the artist needed without much embellishment.

Hamilton was sometimes called “Daddy Pop” for his early influence on the pop-art movement in the 1950’s, and helped inspire later artists like Claes Oldenburg and Roy Lichtenstein. He looks very serious in this photo – more serious than one might expect from pop-art – though Hamilton was known for being a serious artist who practiced at cultural critique and subversion. I wonder about the two artworks that are pictured here with Hamilton – they look very polished, as the artist’s later collage works took advantage of better-quality magazine images for a sleeker look.