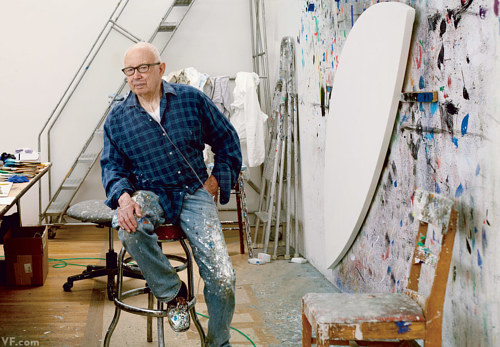 Today we’re looking inside the Spencertown, New York studio of Ellsworth Kelly. The expansive 15,000 square-foot studio has no windows, but numerous skylights let in all the natural light that Kelly needed to work. Ellsworth Kelly continued working in this studio right up until his death last year, and the space likely remains unchanged as of this writing.

The artist’s studio looks bright and well lit – I love the simple setup that Kelly had going on in this picture: a table full of supplies, facing a wall where paintings in progress are hung. Kelly reportedly chose that particular wall because it receives the most morning light, perfect for painting in the early hours of the day. It would be great to be able to tailor your space in such a way, to suit your most productive times. It’s also great to be able to see all the marks on the wall left behind from previous paintings. I wonder if the paint-covered chair in the foreground of the image was used to prop up paintings or hold brushes.

In such a large studio it was likely that Kelly employed assistants to help him with his work, similar to other artists like Damien Hirst and Takashi Murakami– though the artist himself was very present and did a lot of the work himself. Kelly told interviewers that he did not play music in the studio, preferring silence – though perhaps it was not so much silence as the sound of several studio assistants working.

Ellsworth Kelly was known for his paintings that celebrated minimalism, using bright, simple forms to convey more complex ideas. He worked mainly in painting and printmaking, though he also delved into sculpture throughout his career, using a similar, sleek aesthetic as that which appeared in his painted works.