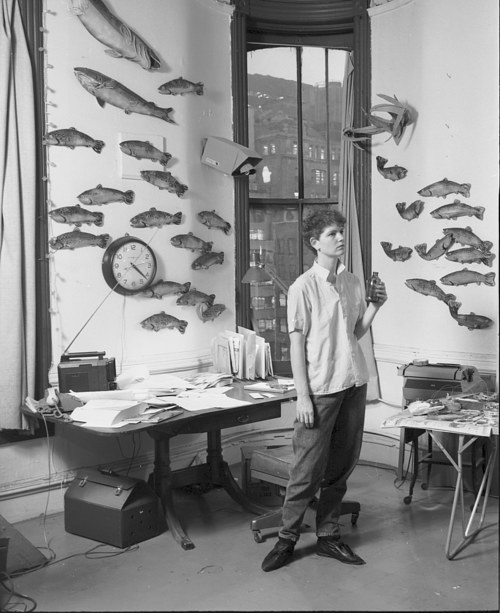 It’s Studio Sunday, so let’s check out the studio of Christy Rupp! Rupp is an American artist who specializes in artworks dealing with themes of environmentalism and social activism.

The artist’s subject matter really comes to the forefront in this photo of her studio, taken in the 1980’s. The walls of the space are covered in what looks like sculptural salmon, appearing to swim upstream across her walls. Rupp was working with these fish forms in the 80’s, so this is likely a recently finish work. It would make great inspirational imagery to have over one’s desk.

There also seems to be a sculpture of a large, boxy security camera adhered to the wall above the window – an interesting nod to Rupp’s politically active artworks.

The remainder of this visible part of Rupp’s studio looks like it is being used to create works on paper. There looks to be a printer in the right-hand corner of the photo, and the two tables are stacked with various documents, drafts and other materials.

I also really like the view from Rupp’s studio. The artist is based in New York, and it looks like this studio is several stories up, giving the artist an interesting perspective of the buildings across the street, and probably the street itself, far below.

Rupp’s practice is varied and uses many materials to express common themes. At the time this photo was taken, the artist was working with imagery of animals commonly seen in urban areas, and themes of pollution and environmental consciousness. Many were works on paper using collage, drawing and painting techniques, while others were sculpted like the fish seen above.

The artist’s practice has continued in this vein through to the present day. For more environmentally-concerned artwork, check out Edie Marshall.