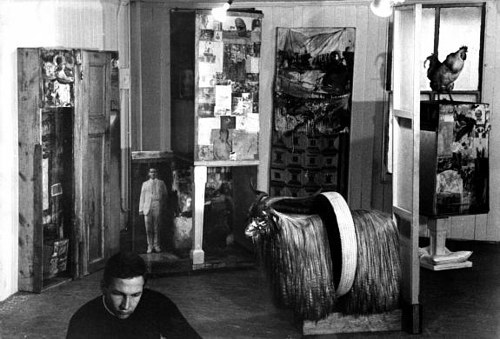 This Sunday let’s visit the studio of Robert Rauschenberg at the height of the artist’s career. Rauschenberg was a well-known American artist who produced work around the abstract expressionism movement and contributed to the later pop-art movement.

Rauschenberg’s studio looks crowded in this photo as it’s stuffed with art objects, possible works in progress and other unique pieces. Around the time the photograph was taken, Rauschenberg was most known for his works that he called Combines. The works utilized a wide variety of found objects, art supplies and other strange and interesting materials in combination, creating works that were visually and texturally different from anything anyone had seen at the time.

I can imagine the artist’s studio as something of a museum – probably stuffed with random object that he’d purchased or found, as well as photographs and supplies for appropriation. Given the way the artist often used thick layers of paint and encaustic, the studio space was probably quite messy as well. It was definitely the sort of environment where creativity was allowed to flow freely.

I like the animal sculpture that’s visible just behind Rauschenberg in this image. It looks like a ram or a sheep of some sort. Its presence reminds me a little of the wolf in Douglas Gordon’s studio. Whether or not they were eventually used in a work, it would be cool to be surrounded by all these interesting items while at work in your studio.

Rauschenberg continued his artistic practice until his death in 2008. He is remembered as an important contributor to modern art, along with close contemporaries like Cy Twombly and Mark Rothko.