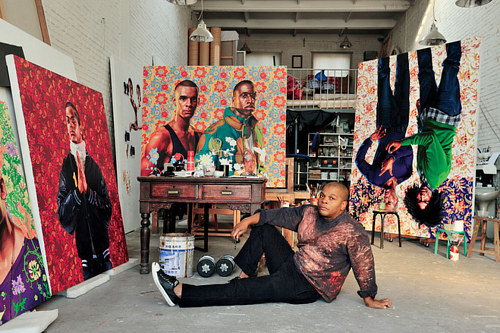 This week’s Studio Sunday featured artist is Kehinde Wiley. Wiley was born in Los Angeles and now lives part-time in Beijing, having said that he likes to paint in China as it’s a place where he can be free of distractions. Wiley also has studios in New York and Senegal.

The studio in the above photo looks spacious but packed with paintings.  I really love the ornate table that Wiley seems to be using as a painting trolley or a stand, here. It speaks to the artist’s sense of personal style, which tends to bleed through into the aesthetic of his paintings, and vice versa. The studio extends far back past the paintings in the foreground, and the whole image has a great sense of drama that I can imagine would have been Wiley’s idea.

It’s interesting to note that the painting on the far right of the image is upside down – I wonder if Wiley works this way, flipping the painting over to reach the section that would be too high up otherwise. I think this also serves as a great technical fix for the issue of perspective that gets lost when a painting is kept too high up.

The artist is known best for his large oil paintings of youthful black figures in contemporary clothing set against ornate backdrops, painted in a style that references the portrait paintings of the European renaissance and later movements which involved the painting of royalty. While many critics interpret the works as a statement on the lack of diversity in art museums, particularly in historical exhibitions, Wiley himself views the paintings as something more of a personal exploration of identity and composition.