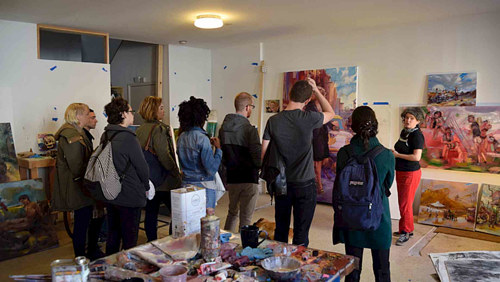 Today we’re featuring the studio of Angela Dufresne. The above photo captures a group of students during a studio visit with the artist. As faculty at the Rhode Island School of Design, I wonder if Dufresne doesn’t often entertain such groups in her studio.

Based in New York, Dufresne is a painter whose works are representational and reference obtuse and mysterious narratives, though they tend not to reveal much about their subjects. The extremely loose brush work that Dufresne uses, combined with the often muddy, half-blended tone of her colours, gives her works an appearance that seems to suggest many different eras and styles of painting at once, while remaining contemporary and unique.

The studio itself seems kind of cozy, and has the unusual feature of a central incandescent light, where most studios today seem to rely on overhead fluorescents or numerous large windows to create the natural and neutral lighting that most artists prefer. One wonders if the lighting in this studio contributes to the coloring of Dufresne’s final works.

Aside from the light, it seems to be a fairly run-of-the-mill painting studio – a central table hold numerous supplies like paint brushes and paint cans, not to mention being caked with paint itself. Examples of the artist’s works are strewn haphazardly across all the visible walls, sometimes stacked on top of each other, while a few charcoal sketches or studies are visible on the floor on the right side of the image. The space looks like a space of equal parts hard work and fun exploration.

Dufresne was born in Connecticut in 1969. She moved to Kansas City and got her BFA from the Kansas City Art Institute, before earning her MFA at the Tyler School of Art in Philadelphia.