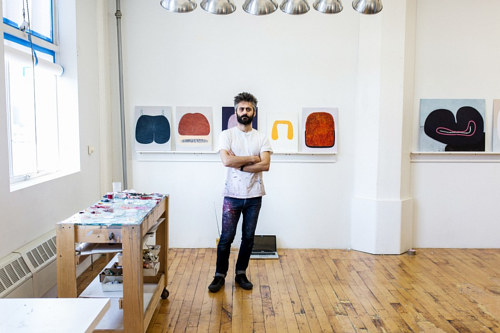 Studio Sunday artist Lui Shtini was born in Albania and now lives and works in Brooklyn, New York. While the artist is fairly new to the scene, he has already garnered praise for his works that combine a heavy, textural sensibility with references to traditional Western art styles.

Some of Shtini’s works are visible behind him in this photograph. This studio itself looks very well lit – there’s a big window on the left-hand side of the photo, and Shtini’s trolley of paints and equipment is sitting right under it. This would be a nice studio space in the summer, when you could enjoy fresh air while you were working.

I like the row of big lights that are hanging from the ceiling, as well – these would come in really handy for seeing what your works look like under the bright lights in a gallery on opening night. The combination of gallery and studio space here seems pretty practical. Also visible is a Macbook on the floor behind the artist. Not an uncommon sight in an art studio these days, but still – I wonder if it’s being used to edit some documentation photos, or to search for inspirational images.

In a recent solo show in New York, Shtini created a series of portrait paintings. The works emulate the specific style of portraiture, with a small amount of shoulder showing below a face that takes up nearly the entire frame – but Shtini plays with this by creating the “faces” out of heavy, textured layers of paint that look almost furry to the touch. The resulting paintings each have a distinct identity, and yet are unrecognizable as far as human features go.