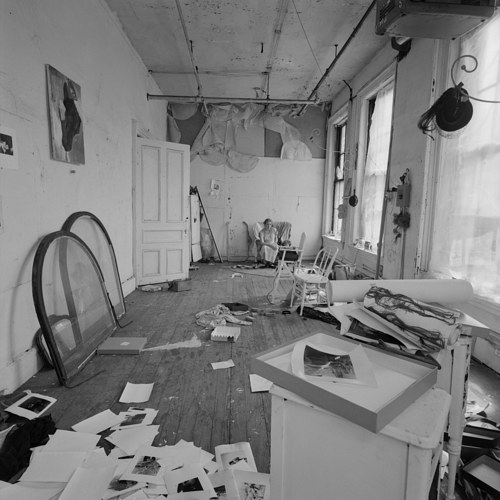 American photographer Francesca Woodman was well-known for her black and white photographs often featuring herself as a model. Woodman was born into an artist family and began producing photographs and art books at a young age. She achieved widespread popularity after her suicide at the age of 22 in 1981.

Woodman’ studio, pictured here in black and white, has the sense of messy creativity that one might associate with youth. The artist, seen sitting in a chair at the far back of the photo, was about 17 or 18 when the photo was taken. Knowing this, the whole studio takes on the aesthetic of a messy teenager’s bedroom.

The space is roomy, but seems almost run-down. Looking at this room, one gets the sense that Woodman was focused entirely on her works, with little care given to upkeep of her studio. Before her death, the artist released a number of art books that were based around text and mathematical diagrams. It’s easy to picture Woodman bent over a desk, studiously copying out handwritten notes or drawings for one of these books.

With plain walls and no furniture aside from a few chairs, this studio space looks almost cold – though it may have been rather pleasant in the summer. The large windows on the wall with their translucent drapes seem to echo the aesthetics of some of Woodman’s work, where ghostly images ask more questions than are answered.

Woodman’s photographs, most of which were released to the public posthumously, frequently featured the artist in somewhat bizarre and surreal poses. Woodman heavily utilized blurring and whitewashing techniques, giving her photographs a dreamy and washed-out appearance.