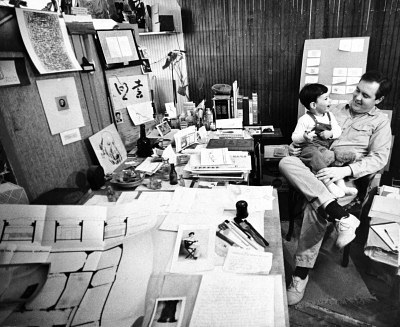 Dan Flavin was an American artist, famous for his work with commercial fluorescent lighting. While he began creating these works as wall-based installation, in the late 1970s he began moving away from this mode of operating, instead building larger, corridor-like structures and replacing much of his studio work with site-specific installation.

The above photo, taken shortly before this move to public art and site-specificity, shows Flavin in the studio with his young son. The studio has a cool, retro office style to it, especially in the wood paneled details visible in the background. The table in front of Flavin is strewn with papers and plans for all manner of installations. Flavin’s studio looks a little cozy, and I wonder about the lighting – if he was using this studio mostly for planning, he wouldn’t have required the large amount of natural sunlight that is often seen in painter’s studios.

It’s cute to see the artist so open to having his family in his workspace. I wonder if Flavin ever went to them for help with brainstorming and ideas. After the artist began working outside at public sites and galleries more often, it’s likely that he kept up the studio space for planning purposes – it probably continued to look similar to how it does in the photo.

Flavin continued working on large-scale sculptures and exclusively worked with fluorescent lighting tubes up until his death in 1996. The artist’s work is currently displayed in several permanent locations in the United States, as well as in Europe. The artist's works  create beautiful fields of light, something like the work of James Turrell.