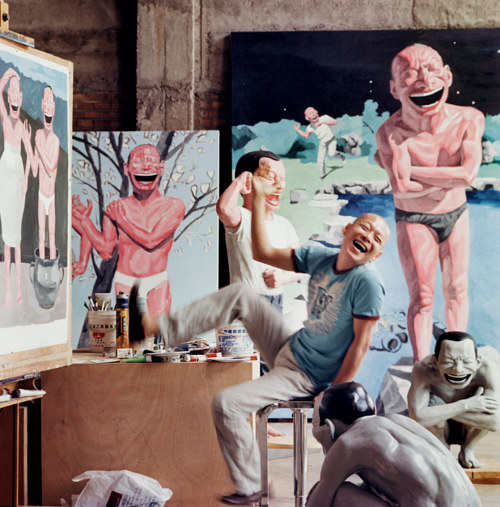 Chinese painter Yue Minjun is widely celebrated for his paintings that always feature human figures made in his own image, with faces frozen in laughter so intense that it becomes almost sarcastic. While the artist has been grouped in with the “cynical realism” movement in China, he personally rejects this label.

Yue’s studio must be a happy, if slightly manic place to be – I really love seeing the artist pictured here as one of his paintings, with a giant grin on his face. I wonder if constantly being surrounded by one’s own smiling face gets weird, or if the artist is simply accustomed to it at this point.

Just behind the paintings in this photo is a glimpse of the studio wall – concrete with red bricks making up the lower half. I would imagine that the studio is quite stark otherwise, but that the bright, bombastic artworks distract from it. Yue has his supplies arranged on a plain, boxy wood desk that’s sitting right up against the painting that he’s currently working on – placed straight upright on an easel. Aside from being surrounded by his paintings, the artist is also flanked on both sides by sculptures that bear an uncanny resemblance to him in this photo.

Yue got his start as an oil worker, painting portraits of himself, friends and coworkers in his spare time. He was inspired by a Geng Jianyi painting depicting the artist’s smiling face. Yue’s focus on his own face throughout his practice enables him to insert a personal yet universally symbolic mascot and persona into each and every painting, creating works that can comment on an entire population with a single figure.