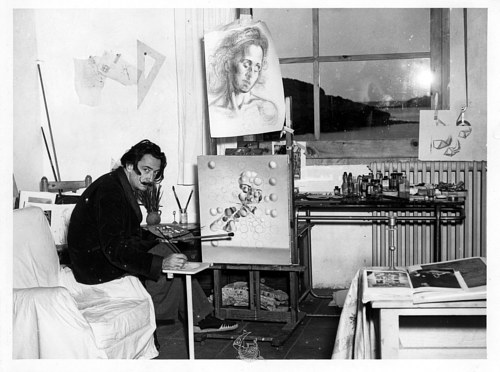 This week’s Studio Sunday artist is Salvador Dali. Renowned for his beautiful works of surrealism, Dali was famous for being both a talented artist and a strange character. The artist was born in Spain and lived there for most of his life, setting up a studio in a fishing house in Portlligat, Catalonia, where he created many of his most famous works.

This fishing-house studio is pictured above – here it looks quite modest – the window pictured on the far wall is the size of a regular house window, and shows a view out onto what is most likely the Mediterranean Sea. The window reminds me a bit of the studio space of Sir Terry Frost, which also opened up onto a landscape view.

The view must have been quite pretty, particularly in the summer months. Given that Dali has a sketch hanging in front of it, though, one imagines that the artist was much more focused on his work than anything that might be happening outside. Known for wild experimentation, Dali often emphasized that art can't be perfect.

The artist has a table bursting with paints, brushes and other supplies set up on a table over the radiator, and looks hunched over working on his current painting on a little easel. I wonder if the white chair in the foreground was used mainly for lounging, or as a place for the artist’s models to sit.

During his time in Portlligat, Dali bough additional fishing houses surrounding the first and eventually built up the expansive villa that still stands today. Following the artist’s death in 1989, the studio and surrounding home was eventually converted into the Salvador Dali House, which now operates as a museum.