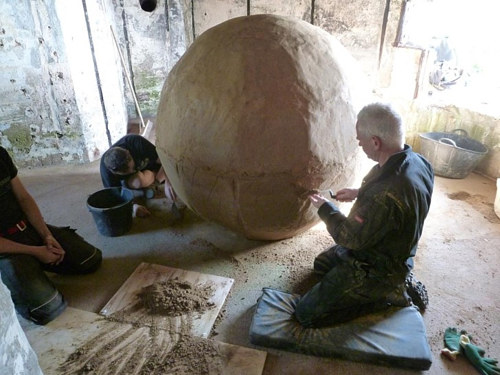 Studio Sunday artist Andy Goldsworthy is known for his site-specific works of land art. Goldsworthy currently lives and works in Scotland, often working outdoors in the environment that he is opting to manipulate for a given art piece.

Goldsworthy is pictured here working on a specific project with a number of assistants. The project, called the Alderney Stones project, encompasses a number of artworks that take the form of giant balls of clay with secret found objects concealed within them. The balls were then left to slowly erode in the natural environment, eventually exposing the found objects within them.

It’s difficult to tell whether the work pictured above is occurring in a formal studio space, or in a makeshift space set up near one of the project sites. For the right person, it might be fun to get to do most of your art-making outdoors, though I think I’d probably get cold. At any rate, the studio looks like a fairly rudimentary set-up, and Goldsworthy seems very hands-on with his work. I wonder how long it would have taken to complete such a project, and how (if needed) they would have moved the sculpture to its resting place.

Goldsworthy is thought of as one of the “big names” in land art – a term that was originally coined by Robert Smithson. Though conceptually different, the shape and size of some of Goldsworthy’s projects  make me think of works by Martin Puryear.