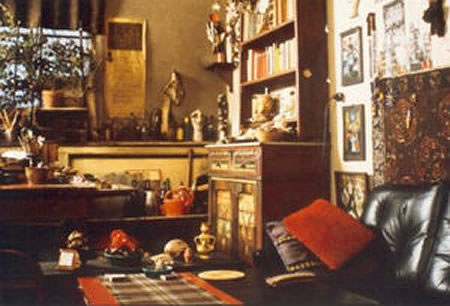 Jeanne Mammen, our Studio Sunday artist this week, was a German artist who was active during the Weimar period of the early-20th century, which was marked by the production of slightly surreal and grotesque figurative painting and drawing. Mammen’s work often featured female figures and imagery of everyday life in Berlin.

Mammen’s work was denounced by Nazi’s during the Second World War, leading the artist to stop exhibiting during that period. The images of the studio spaces pictured above and below were taken later in the artist’s life, in the 60s and 70s, after she had produced the work for which she is perhaps best known.

I like the very cozy, homey appearance of the above space. It doesn’t really seem like a studio at all, but on closer inspection one can see plenty of drawing and painting supplies on the table on the left side of the image. Behind that table, there is a shelf that appears packed with books. I’m always interested in what type of books artists keep in their studios – they add a studious, inviting tone to the space.

The bottom photo, taken in the 1960s, is definitely more like a standard studio space. It’s packed with paintings and books, as well. I especially like the large picture window and the candelabra sitting there – it lends the space a dramatic, gothic appearance.

Mammen passed away in 1976. In the years just prior to, and following her death, her art experienced a resurgence as scholars of both German and feminist art discovered works that had been forgotten for several decades. Some of her abstract work was featured in a 2013 exhibition as part of Berlin Art Week. 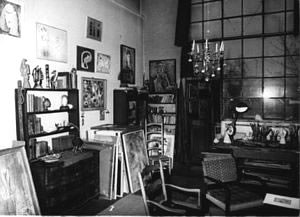