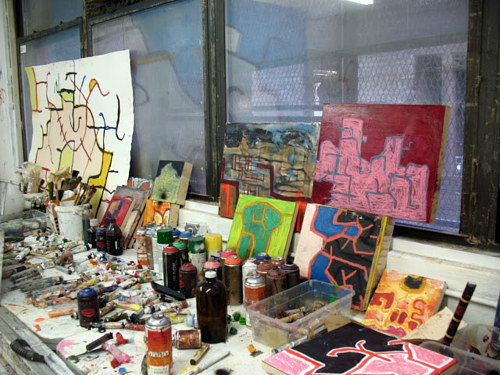 Chuck Webster is a New York-based artist who is known for his works of soft abstraction showing lone geometric figures on abstract, materially-focused backgrounds. Throughout his artistic career, Webster has made a point of experimenting with creating his paintings on different grounds and in different sizes, though his style remains highly distinct and recognizable.

As seen in the photo above, Webster’s studio looks like a place where a lot of work gets done – even in close-up, the space is chaotic and filled with half-used tubes of paint, bottles of oil or solvent, spray paint, and even some brushes. Though the space is packed, I like that there seems to be some method to the madness, with items seemingly organized categorically across this table.

The artist tends to work on a fairly small scale by contemporary art standards, with each painting measuring probably less than two feet wide. The small scale probably allows Webster to work on a huge number of paintings at once, perhaps one of the reasons that his style has evolved to use these repeated geometric shapes and lines. Though I can’t see it in this photo, I would imagine that the rest of the studio space is also filled with stacks of paintings, finished and in-progress.

Webster’s works are in the permanent collections of the Whitney Museum of American Art and MFA Houston. The artist’s style has been compared to that of artists such as Thomas Nozkowski and Philip Guston.