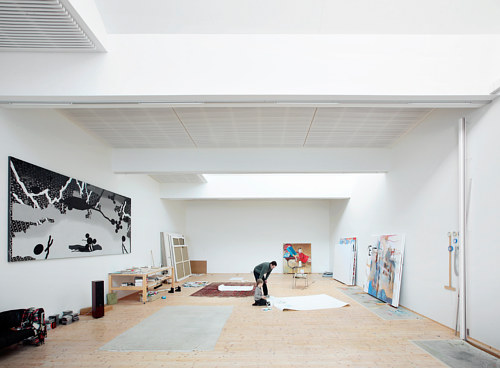 Our feature this Studio Sunday is Albert Oehlen. Oehlen is a German artist who creates paintings that address the process and materiality of painting itself. The artist is currently based in Buhler, Switzerland, where he works out of a two-story art studio that was designed by a collaboration between two swizz architecture firms.

Atelier Albert Oehlen, looks like every painter’s dream studio. The interior of the studio space is incredibly expansive and well-lit. The artist looks dwarfed by the sheer size of his workshop in this photograph.

It also looks as though the studio is well designed from a functionality standpoint. On the ceiling, one can see a number of what appear to be vents, which would be absolutely necessary for an artist working with such a huge amount of paint.

Speaking of paint, the studio looks almost shockingly clean – there’s barely a speck of paint visible on the floor, though given the vastness of the space maybe it all collects in just a few corners. The cleanliness of the space, along with its white walls and pale wood floors gives it an aesthetic that very much echoes the look of an art gallery – perfect for testing out the look of finished paintings before shipping them off to exhibitions.

Oehlen seems to be working on an un-stretched canvas in the photo. Or perhaps he is prepping it to be stretched. It’s nice to see a little bit of clutter toward the back of the studio, with a few canvases stacked against each other on the wall.

As well as being associated with the German Neue Wilde art movement, Oehlen is also involved in the music scene, even owning his own record label for a period of time. The artist was a friend and contemporary of Martin Kippenberger prior to that artist’s death.