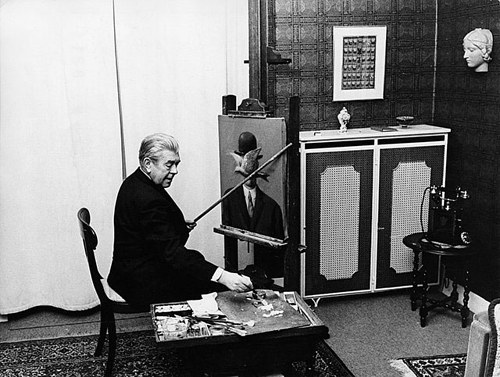 Our studio Sunday artist this week is Rene Magritte. Magritte was a Belgian painter who created works of dreamlike surrealism using a detailed, realistic style. From the late 1920’s up until his death in 1967 Magritte created numerous paintings in a smooth, softly blended style that would later come to influence movements like Pop Art and Minimalism.

Magritte’s studio looks almost dainty in its way. Though the studio seen above was fairly normal for its time, compared to the expansive, concrete studio spaces of today, Magritte’s seems very homey. I love seeing the artist working on this little painting, sitting in a chair that also looks almost too small - the whole thing seems almost performative in a way.

Dressed rather dapper for the studio, Magritte’s overall look here is vaguely reminiscent of a later David Lynch in his painting studio, and the feeling of the image harkens back to a time where surrealist artists like Magritte, Salvador Dali and others were seen as sort of celebrity poster-boys for weirdness.

I especially like the small mask on the wall directly in front of Magritte – it seems like the aesthetics of such a sculpture, very classical yet somewhat odd in context, could have inspired some of the imagery in Magritte’s paintings.

Rene Magritte began his artistic career studying at the Brussels Académie Royal des Beaux-Arts from 1916 to 1918, but he didn’t produce his first surrealist artwork until ten years later, in 1926. At the time, the artist’s work was panned by critics, but after meeting fellow surrealist André Breton, Magritte continued working in a similar manner and slowly gained more recognition. Today he is considered one of the most important Belgian and European artists of the 20th century.