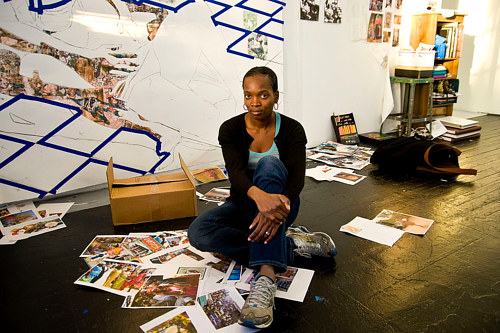 Crosby usually creates her works on paper, with a combination of traditional media like painting, printmaking, and collage. Photo transfers are also a frequent incorporation. This affinity for more paper-based media is obvious in this photo of Crosby – the floor of her studio is strewn with what appear to be letter-sized printout photographs. I wonder if these will later become collage elements, or if the artist is using them as reference materials.

This artist’s work with collaged paper, as well as the general look of the studio is sort of reminiscent of Wangechi Mutu’s studio in a conceptual way, despite the differences in design between the two spaces.

I like the scale of the work in progress on the wall behind Crosby. It seems to take up the entire wall and dwarf the artist and the rest of the studio space. I’d find it interesting to work on an art project of such a massive scale with collaged elements that seem so small. The collaged bits on the work so far are densely packed with detail that’s too small to make out in this photo, but lends a sense of deliberateness to the entire space.

Crosby moved to the United States to study in 1999 at the age of 16. Her works have been shown in a variety of galleries in Los Angeles and New York, as well as internationally.