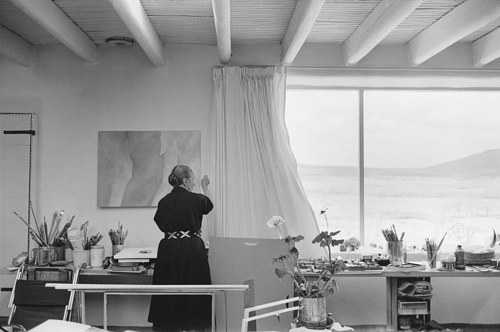 Painter Georgia O’Keeffe, sometimes called the “mother of American modernism,” was known for her large paintings that depicted close-up views of flowers. O’Keeffe studied art from an early age, but began her formal career after moving to New York in 1918.

O’Keeffe’s studio looks wonderfully airy in this photo, and the desert landscape visible just outside the curtains seems rather peaceful. This photograph was taken later in the artist’s career, once she was quite well-established and had the means to furnish herself with a spacious art studio in her chosen home of Santa Fe, New Mexico.

The high ceilings with wood beams lend a sturdy sense to the space, and though the walls and ceiling are painted white it doesn’t seem cold. I really love that flowing white drape in front of the window – I find the curves of the drapery suggestive of the curves of flower petals within O’Keeffe’s paintings.

Everything in the studio space seems to speak to a high level of quality – the long table that runs the length of the photograph holds and uncounted number of brushes and various painting implements, so O’Keeffe could always find the perfect brush for whatever mark she needed to make. It’s hard to tell how O’Keeffe is interacting with the space here – is she working on the painting that hangs on the wall? Or simple setting up equipment for another project?

O’Keeffe passed away in 1986, but her paintings have continued to garner fame, such as Jimson Weed, which sold for over $44 million in 2014 making it the most expensive sale of a work by a female artist at the time. O’Keeffe’s studio space now exists as a museum.