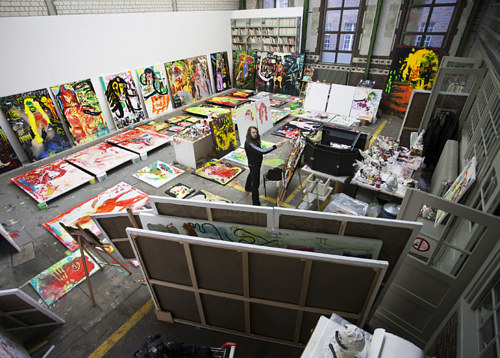 Today’s Studio artist, Johnathan Meese, is a painter, sculptor, and performance artist based in Hamburg and Berlin, Germany. The artist was born in Tokyo. Though Meese’s works are varied in style and media, and the artist is quite well-known for his performances, this photo of his studio definitely showcases the painting side of his body of work.

Meese’s paintings alone transform the warehouse space into a colorful wonderland. There’s so much work in this space, and yet it’s large enough that it doesn’t quite feel crowded, rather, busy. Meese is pictured alone in this photo but I don’t doubt that he employs at least a few assistants to help him work his way through this mountain of paintings that he’s got to work on.

The warehouse-style studio is reminiscent of that of Tomory Dodge, and other painters working with a similar color palette. It’s an interesting visual, the contrast between the stark, grey walls and floor and the highly saturated paintings. It sort of helps to foster a dual sense of industrialism and street art, both of which seem to inform the artist’s practice to some degree.

It’s also neat that there are so many windows in the space. It looks like it might be at street level, as if passersby could glance in and see Meese hard at work on some artwork, whether it’s flat on the floor or propped up on an easel.

Meese is currently represented by galleries in New York, London, and Paris, as well as having works in a number of German collections. The artist’s works have been known to draw controversy, and regardless of medium create a divisive critical opinion.