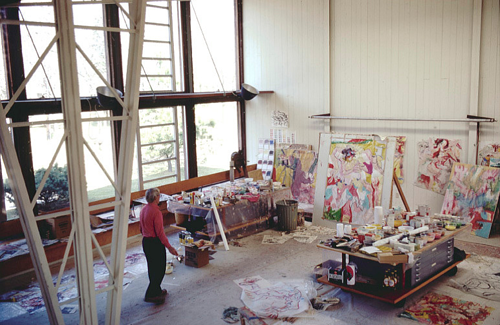 Born in Rotterdam, Netherlands in 1904, Willem de Kooning moved to New York in 1927, where he later became known as one of the most important artists in American abstract expressionism. De Kooning was known for a style sometimes known as “action painting,” which featured heavy, gestural brush marks and a wild, splashy abstract aesthetic.

De Kooing’s studio space in this photo reminds me of Alexander Calder’s – it’s very open with an extremely high ceiling, though unlike Calder, De Kooning doesn’t have anything hanging from the ceiling. The photo itself gives us an interesting, aerial view of the full space.

I love how full of light this studio is. The big windows on the left wall must offer an incredible amount of natural light. I would guess that this is De Kooning’s home studio, and probably a bit later in the artist’s career, when he would have had the means to create a very spacious workshop for himself and for any assistants he employed.

It’s also neat the way the artist is pictured standing quite far back from a painting – he looks as though he’s deep in thought about it, holding a brush as if poised to the next line or mark, but standing back to determine precisely where it should go.

There’s quite a number of paintings on that wall alone, and I love the bright color palette that the artist is going with for most of them. You can see some of the same colors in the buckets of paint on De Kooning’s work tables.

De Kooning passed away in 1997, but his works live on in numerous museum collections as well as private collections. Many of the artist’s works are highly valued, and as recently as 2016 have sold for record prices at auction.