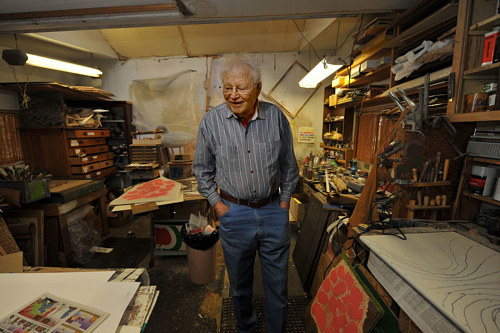 Today’s Studio Sunday artist is Charles Beck. Born in Fergus Falls, Minnesota, Beck made a name for himself as a woodcut print artist and painter in the 1950’s. Beck’s works are known for their simplicity and subdued color schemes – the artist sometimes created paintings on location in the Minnesota wilderness, and his subject matter often reflected that landscape.

Beck’s studio is cozy and packed with art supplies, wood boards, and shelving. In its cozy, homey clutter, this studio space reminds me of the home studio of Eugene von Bruenchenhein. I’m amazed with just how much stuff is packed into this space – it looks random, an ever-changing arrangement, with supplies shifting location between the shelving units behind Beck, to one of the three or four separate desk spaces that are pictured. Yet it’s also nice to think that the artist himself knows exactly where everything is.

The room seems to have a low ceiling, with lighting fixtures hanging almost precariously from wooden beams in the ceiling. I’m guessing that this is a home studio, so perhaps it’s located in the basement of a house, a sort of underground artist’s retreat.

I like how cheerful Beck looks to be in his studio, in this photograph. Though the space may be a bit messy, and apparently windowless, it also has the appeal of being a productive zone, and one where the artist can explore his own personal interests without outside interference.

Charles Beck passed away at the age of 94 in September of 2017. His works remain in museum collections around the world, as well as in the private collections of friends and fans.