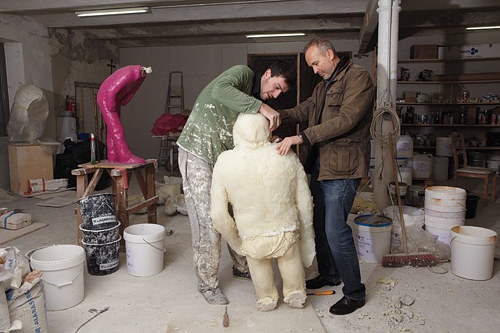 Today’s studio Sunday artist is Erwin Wurm. Born in Austria, Wurm still lives and works in Austria between the cities of Vienna and Limberg. Wurm is best known for sculptural and installation works that take familiar objects and spaces and distort them into bizarre facsimiles that are at once humorous and disturbing.

Pictured above, Wurm’s home studio in Limberg is where the artist creates his sculptural works (and perhaps brainstorms and practices some of his more performance-based conceptual artworks.) The artist is seen working with an assistant, so it’s likely that he employs several – the studio space is probably a fairly busy area, with lots of different projects being worked on at once.

The studio above appears almost cramped, with relatively low ceilings, and shelving and materials placed at every corner. It looks as though the artist is much more focused on the work he’s doing than on keeping the studio looking presentable. Even so, the studio looks like a fun place to spend some time, especially on sculptural projects – all the materials you’d need seem readily available.

Many of Wurm’s artworks are produced on a larger scale and would likely be fabricated outside of this studio space. Like Rachel Whiteread, Wurm has produced works as large as an entire house – Wurm’s Narrow House was a work in which viewers could physically enter a space that was constructed to be awkwardly small. Wurm’s artworks exist in numerous collections around Europe and the United States, including the Guggenheim and Centre Pompidou.