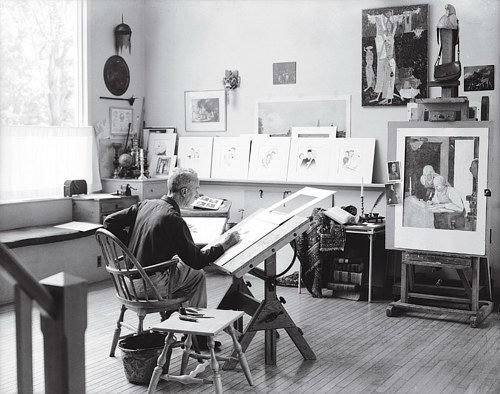 Today’s studio Sunday artist is Norman Rockwell. Rockwell was an American author, illustrator and painter who was active throughout the beginning of the 20th century. Rockwell became known for his paintings and illustrations of American life, and his name and style have become synonymous with the aesthetics of vintage Americana.

Rockwell’s studio looks charmingly neat and tidy in the above photo. The wood floors in particular appear polished, with not a spot of paint or graphite dust to be found. I wonder if Rockwell spent a lot of time cleaning the space, or if he was simply a very neat worker.

The whole space has an idyllic, home-like atmosphere to it, from the large picture window that appears to offer a view of a garden or forested space, to the open atmosphere and numerous artworks lined up neatly along the walls. I think it would be lovely to spend a day in here, creating artwork and enjoying this open atmosphere.

From Rockwell’s apparent age in the photograph, this seems to be later in the artist’s career, when he would have been able to spend more time on his drawings, making a living from them. And it looks like he spent a lot of time on them – his desk setup includes what seems to be two drawings at once (perhaps one is a reference), and several of the works on the far wall look to be in-progress.

During his lifetime, Rockwell’s works were sometimes maligned by critics for being overly saccharine and even banal. Toward the end of his life, Rockwell gained more serious recognition for tackling difficult subjects like class and race. Generally well respected even today, Rockwell’s works still grace a wide variety of American products and advertisements.