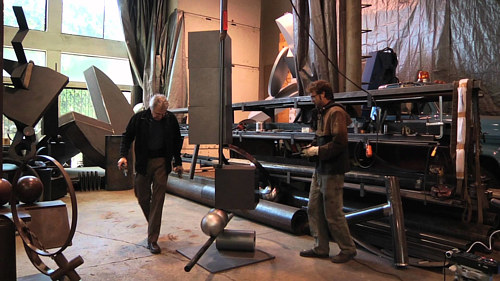 Fletcher Benton is an American metal sculptor. Based in San Francisco, California, Benton is known for his kinetic sculptures artworks, as well as large-scale steel sculptures that he began producing in the 1970’s. As a kinetic artist, Benton maintained a sense of isolation throughout much of his early career, creating his works in something of a vacuum.

Benton’s studio reminds me of the likes of Richard Serra, or David Nash. The numerous large metal sculptures take on the look of trees in a forest, and the warm, almost dim lighting adds an extra sense of drama to the whole space.

I wonder if Benton’s studio space is noisy with the artist and various assistants working on metal projects. It would certain feel more like a machine shop than a traditional artist studio. The object in the background on the right side of the photo looks to be some sort of large machine, so it’s likely that at least some of the fabrication is done right here in Benton’s own studio space.

Though the space is somewhat crowded, it still gives the impression of vastness – high ceilings and large windows offer an even larger sense of space. I can imagine this studio being a very active place, with lots of large-scale, physical work being done at all times.

Many of Benton’s large-scale works were fabricated specifically for outdoor installation. These works are installed in San Francisco, New Jersey, and multiple locations in Germany. The artist has exhibited all around the world and his works are currently included in a long list of prestigious museum collections.