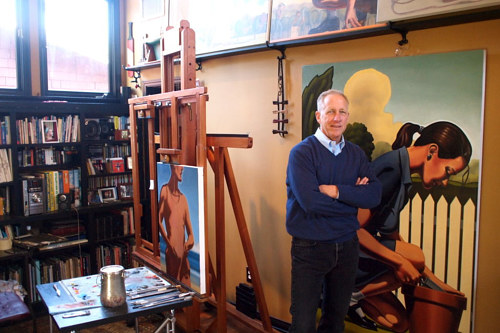 Today’s Studio Sunday artist is Kenton Nelson. Born in Los Angeles and now based in Pasadena, California, Nelson is a painter best known for his bright figurative works that draw inspiration from American murals and painting from the 1930’s.

Nelson’s studio space, pictured here, looks pleasantly warm and homey. This isn’t the hangar-like white-walled space that we often see large-scale painters working in. Instead, the studio has inviting, warm-hued walls and a large, heavy bookcase that appears to take up the entire far wall. I really enjoy that book shelf – to me it would be important to have access to references and inspirations right in the studio, and Nelson seems to share that thought.

The shelf, too, is absolutely packed with materials. It keeps a nice balance between totally clutter, and sleek organization. It looks very lived-in. I also quite enjoy the row of windows above the bookshelf that give the impression of being lower than ground level. Perhaps this is a basement studio, all the better to keep cool during California summers.

Nelson’s solid-looking wooden easel furthers the heavy, studious look of the furniture. While the aesthetic is quite a bit different, the overall feeling of this studio space reminds me of the studio of David Shrigley. It’s another home studio where it seems very well-integrated into the overall look of the home.

Kenton Nelson’s paintings have been featured five times on the cover of The New Yorker, and have been featured in exhibitions all over the United States and Europe. The artist’s style, which bathes the subjects in idealistic, dramatic sunlight, references an invitingly optimistic point in U.S. history.