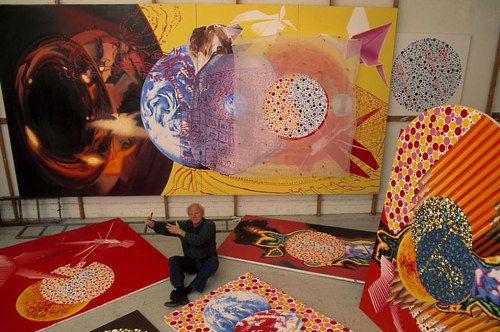 This week’s studio Sunday artist, James Rosenquist, was born in North Dakota and grew up in Minneapolis, Minnesota. At the age of 21 Rosenquist moved to New York, where he quickly became one of the most important artists associated with the American pop art movement. The artist was known for large-scale works that borrowed aesthetics from 1950’s advertising and sign painting.

The photo above shows Rosenquist in his studio later in his career, with paintings that are more abstract than the earlier work that the artist is particularly known for. I’m struck by how massive the space looks! Rosenquist himself is dwarfed by his paintings.

The wall behind the artist is crossed with support beams – given that the artist’s works were often at the scale of an entire wall in a room, I wonder if these are to support large hanging paintings, or if he’s continuing to add segments to the painting that’s already hanging on that wall. I wonder if Rosenquist works on his paintings in a similar configuration, or if there’s an easel just out of frame containing more works in progress.

Rosenquist received numerous art awards during his lifetime, and his works are in various museum collections throughout the world. He also completed a number of commissioned pieces, including a large-scale mural for Deustche Guggenheim in Berlin. The Guggenheim organized a travelling retrospective of Rosenquist’s work in 2003. The artist passed away in 2017 in his home.