Painter and choreographer David Ferguson creates weighty, tactile abstractions and equally expressive patterns of movement. Often working in collaboration with other dancers and choreographers, David participates in both the behind-the-scenes production and the performance of his dances.

In his dance performances, David often seems to incorporate elements of nature, like water and trees. Sometimes it seems as though the aesthetics and movements of these natural forms also make their way into the choreography, in performances that alternate between fluid, interconnected movements and pauses in statuesque poses. 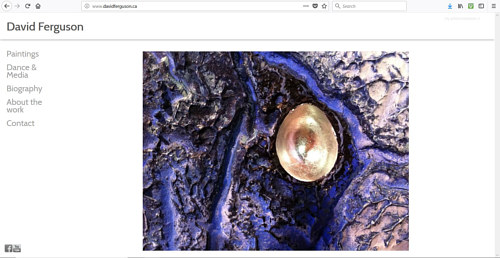 This reverence for natural forms also seems present in David’s visual artworks. His mixed media artworks are heavily textured, often calling to mind tree bark or topographical maps, islands seen from above. The deep, heavy presence of these works makes me think of pieces by David Maxim. I look forward to seeing where David’s practice has taken him in more recent years.