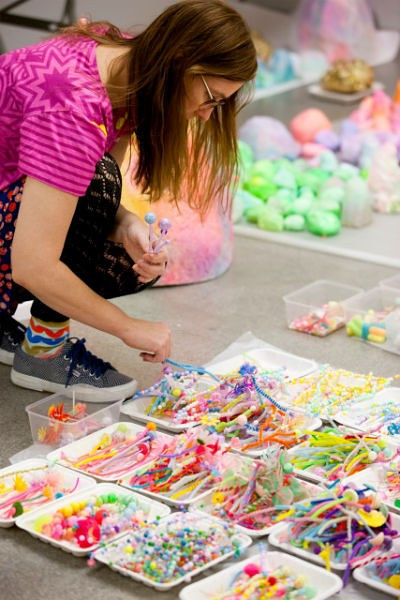 Today’s Studio Sunday artist is Pip and Pop. Based in Perth, Australia, Pip and Pop began in 2007 as the artistic duo of Tanya Schultz and Nicole Andrijevic. Andrijevic left the project in 2011 to pursue her own career but Schultz has continued the legacy, installing bright, candy-coated worlds in galleries and public spaces.

Because of the temporary, site-specific nature of much of Pip and Pop’s work, Schultz’ studio space is often just whatever space where the next installation will be. This idea of a nomadic studio space is shared by other artists who have worked in this manner, like muralist Judith Baca, or Dan Flavin toward the latter half of his career.

While the space itself may change, Pip and Pop’s process for creating artworks seems to maintain a basic structure, with the artist slowly, steadily arranging a variety of objects on the floor, building up a rolling landscape from tiny, fragile materials including what appears to be chalk or perhaps colored sugar (pictured below.) In the photo above, Schultz seems to be placing what looks like trays upon trays of colored pipe-cleaners, plastic beads, and other small trinkets.

There’s an adorable sense of wonder to both the artwork and the process of its creation. While I can only image the intensity of labor required to construct these room-filling installations, something about the candy-like materials that Pip and Pop uses makes it seem like a fun game, done more out of love than of necessity.

Pip and Pop’s works have been exhibited throughout Australia, Europe, and Asia. The artist focuses on a utopian mindset, creating temporal paradises that allow viewers to escape from reality, even if just for a few fleeting moments. 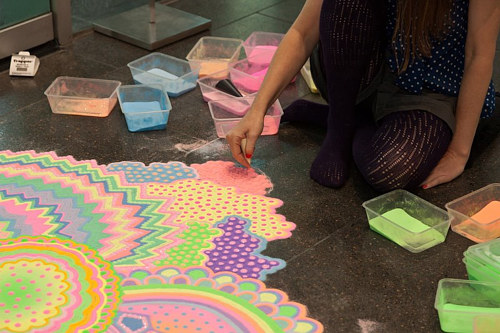