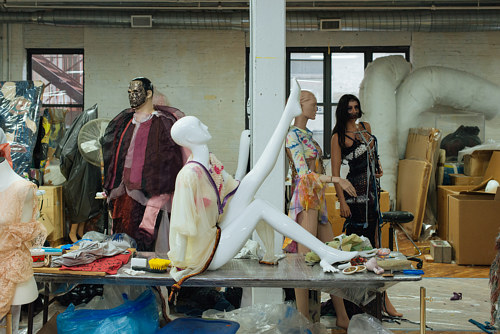 Norwegian artist Bjarne Melgaard is currently based in New York, where he produces works in paint, sculpture, and most recently, fashion. The artist is as noteworthy as he is controversial, particularly in his homeland where he’s been called “the most famous artist since Edvard Munsch.”

The studio space as presented here looks quite wild -- numerous mannequins and figures sit and stand on whatever floor or table space can be found. While there are definite similarities in the overall atmosphere, these are figures in a very different sense than those in Bharti Kher’s studio.

Recently, Melgaard has broken into the world of fashion design, and the numerous mannequins presented here in this studio seem to be dressed in a few of Melgaard’s designs. Like the rest of his work, the space, as well as the designs themselves, are chaotic and visually overwhelming – one must examine this photo for several minutes to truly parse all the details hiding therein.

I’m interested in the haphazard piles of material and objects visible in the background of this image, toward the wall of Melgaard’s studio. It looks like he has cardboard boxes and bags positively stuffed with materials that are, for lack of a better term, random. This is certainly an artist who thrives in chaos, moving from project to project and idea to idea with little thought as to a logical sequence of connections.

Melgaard recently made headlines over his plans to build a large scale-installation – in the form of a massive, artistically adventurous house – on land that is known as the subject of a Munsch painting. Melgaard’s proposed collaboration with an architectural firm for that project is one of the many collaborations that the artist has participated in.