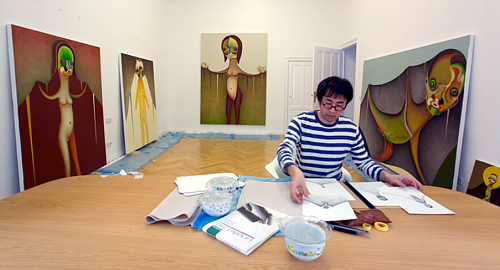 Izumi Kato currently lives and works in Tokyo, Japan. The artist was trained in oil painting, but has since developed a novel approach to painting, often applying pigment directly with his hands. Izumi is known for his artworks depicting humanoid yet bizarrely distorted and alien figures, using an interesting array of sometimes-incongruous colors to create the works.

Izumi’s studio looks very clean in this photo. Astonishingly clean for an artist’s studio, actually! I wonder if the artist has another room where he works on the messier bits of his paintings and sculptures. I love the way he’s set up his paintings on three walls behind him. The figures in the paintings appear to be watching him work.

This studio setup is reminiscent of the space of Zhang Xiaogang, though on a smaller scale than Zhang’s warehouse. The clean wood table in Izumi’s studio also looks a bit like the desk where Tokushin Yoshioka creates his works.

What’s Izumi working on in this photo? It looks like the artist has a few sketches set up in front of him – the figures on the papers look very similar, so perhaps they’re three practice versions of an upcoming work. There’s dishes of what looks like painting water on the table as well – it’s possible that Izumi is working on these sketches, or simply brainstorming ideas for later artworks.

Izumi did not begin his formal art career until he was in his thirties, giving him a unique perspective as something of a “latecomer.” The artist had plenty of time to develop a certain eye for aesthetics and technique before experimenting much in the field.