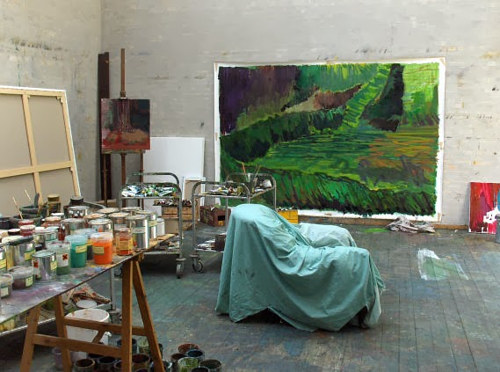 Per Kirkeby was a Danish artist who worked in painting and sculpture. The artist was especially well-known for abstract paintings that focused on structure and composition, even occasionally incorporating an architectural sensibility. The artist had a formal education in geology which tended to inform his practice.

Kirkeby’s studio is messy, paint-splattered, and has the slightly dark, crowded atmosphere of studios like those of Francis Bacon or Markus Lupertz. I like the flooring in Kirkeby’s studio – it looks like natural wood that’s been distressed and coated in various paints for years and years. The concrete walls, in combination with these now-grey wood floors, gives the whole studio space an interesting aesthetic – it looks almost like an abandoned building that’s been co-opted into a creative space.

It looks like the artist was working on a painting on an unstretched canvas when this photo was taken. The painting itself is affixed right to the wall rather than being propped up on an easel. There’s a much smaller painting on an easel in the corner – I wonder if this is a stand-alone work, or a sketch for something even larger.

The artist has a big table and a couple of metal carts just covered in numerous jars of paint. With works this size and with such densely layered paint I’m sure Kirkeby went through countless jars of paint in a few months.

Kirkeby enjoyed a long artistic career, spanning from the 1960’s -- when he dabbled in performance art with the likes of Nam June Paik and Joseph Beuys – to the 2010s. Kirkeby stopped painting in 2013 after a traumatic injury, and passed away in May 2018 at the age of 79.