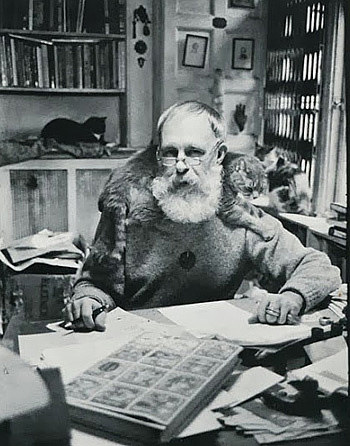 This week’s Studio Sunday artist is Edward Gorey. Gorey was an American artist who specialized in pen-and-ink drawings and was best known for his illustrated books. The artist often approach his work with a sense of macabre humour, and many of his drawings depicted children and other figures in Victorian or Edwardian styles.

The first thing I notice in the above photo of Gorey at his desk is all the cats! I love to see an artist with pets. Given Gorey’s propensity for oddities and slightly off-kilter, gothic humour, it’s somehow not surprising that he would have kept many cats. It’s also neat that he apparently allowed them to roam around his studio, even sitting on his shoulders while he worked.

Ai Weiwei is another artist who cats in his studio, but I don’t know if I can imagine Ai with a cat on his shoulders.

As an illustrator, Gorey must have spent a lot of time working at a table, on a relatively small scale. The artist’s drawing table is positioned right under a window – I can imagine Gorey working late into the night by the light of the moon through this window, perhaps drawing inspiration from eerie late-night scenery. I’m also taken by all the books in the studio, and that telephone. Sitting on his desk in the bottom black and white photo, it gives the whole room a very stylish, noir feeling.

Gorey was born in Chicago, later living in New York, and Cape Cod. While in New York, he worked as a professional illustrator, creating illuminations for other publications, including a certain print run of Braham Stoker’s Dracula. Gorey passed away in 2000, leaving behind a considerable amount of unpublished work. 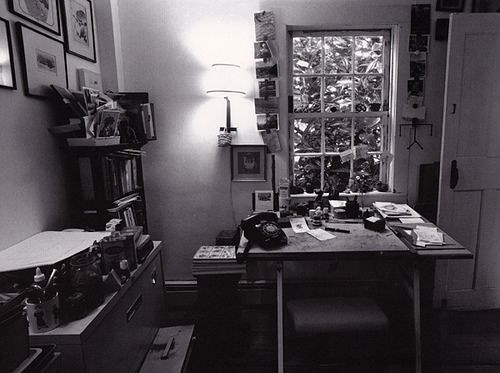