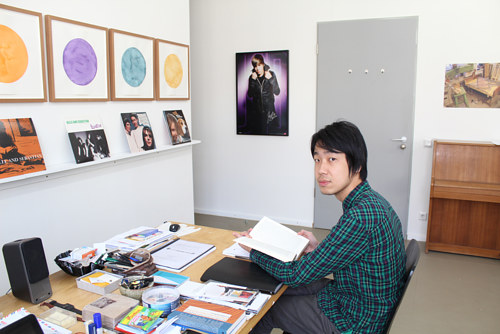 Singaporean conceptual artist Song-Ming Ang is known for his work with music. Ang often utilizes actual music instruments in his practice, deconstructing and rebuilding them or forcing them into different configurations. The artist also frequently incorporates video, performance, and multimedia elements into his work.

Ang’s studio looks bright and clean, something like the studio spaces of other artists like Margaret Lee or Izumi Kato. This space is in the Künstlerhaus Bethanian, a former hospital in East Berlin that’s since been refurbished into a block of artist’s studios.

It’s evident in this studio space that the artist doesn’t necessarily do a lot of work with traditional media like paint. Rather this seems more like an office space – a place where the artist does a lot of thinking, planning, and editing with digital media and video. The studio seems like a good fit for this type of work – it’s got plenty of natural light, a clean aesthetic, and the space is big but not too big. It’s the perfect size for a spacious desk and plenty of books and inspirational materials.

It’s also interesting to look at the various pop-culture references that appear throughout the studio space. Behind the artist, near the door, is a big poster of Justin Bieber. Perhaps Ang is a fan, or maybe the artist has previously worked with Bieber, either collaboratively, or using the pop singer’s music as the jumping-off point for a work.

Song-Ming Ang has also worked as composer, creating musical pieces in a more straightforward vein. The artist himself likes to think of music beyond its status as an individual artistic expression. Some of his performances and projects have been collaborative and interactive, encouraging viewers and the public to participate in the creation of a new way of seeing music.