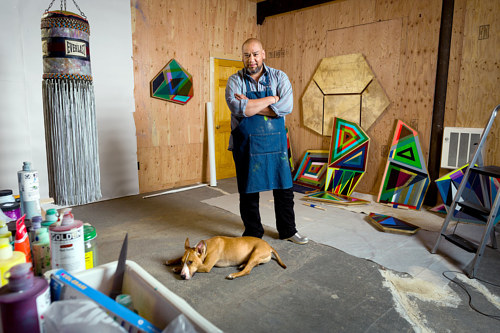 Jeffrey Gibson is a painter and sculptor who currently lives and works in New York. The artist was born in Colorado and spent time living in both Germany and Korea in his youth, leading to an interesting blend of cultural influences in his artwork. A frequent motif in the artist’s work is also Gibson’s Choctaw-Cherokee heritage.

Gibson’s dog appears to be keeping him company in the studio in this photo – it’s an image reminiscent of Lily Stockman or Edward Gorey’s studio. Studio pets always make the studio itself seem even more fun and welcoming.

The actual space of Gibson’s studio looks rather interesting. The plywood panels that cover the far wall create an aesthetic that makes the whole space look like it’s under construction, as though Gibson is in the process of reinventing not only the artworks that he’s creating, but also the space where he produces his work. In contrast with the bright, geometric abstract paintings that appear on the walls and floor, this plywood panelling is an unexpected background, something you wouldn’t see in a gallery but that certainly adds a dimension of contrast to the artworks.

In the foreground, there’s a table covered in large tubes and bottles of paint – a common sight in an artist’s studio, and one that helps to ground Gibson’s studio.

Jeffrey Gibson received his MFA from the Royal College of Art in London, and currently teaches at Bard College in New York, where he’s also an Artist in Residence. The artist often combines traditional Native American motifs and aesthetics with imagery from western pop culture, creating a contemporary hybrid – something like the artwork of Sonny Assu.