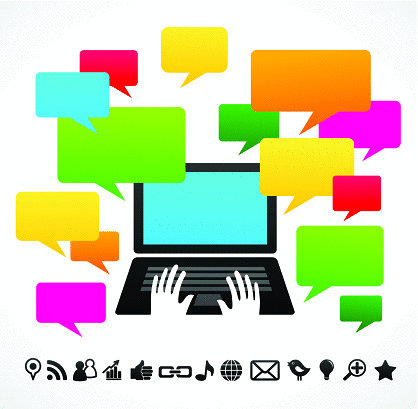 Being strategic with your social media is having your cake and eating it too. I encourage you to use multiple forms of social media at key times to remind people that you have created a new series of paintings etcetera. To get this exciting new work out there people need to be reminded and to have that information present in their day-to-day. I started my day today with an email reminding me about a an art show tomorrow night. I'll definately be going because this reminder email came at the perfect time, since, like many other people I check my email every morning. Also because I had already been notified about the event on Facebook I had already planned to be present, I just needed the nudge of the reminder. It's true that people sometimes need to hear about an event a few times before they can say that they are definately going. The buzz on social media can reassure them that they won't want to miss it, it's not a waste of their time.

When you are having an art event social media might seem like the last thing on your list. For example you forgot to hire a photographer to document your work and become consumed with the task of making that happen. You're exhausted to the point where all your regular routines may have gone out the window. You secretly ate McDonald's for breakfast when that was something appalling to you before...before the chaos of "gittin 'er done". As overwhelming as it may seem, don't forget to add social media to the top of your priority list. In the realm of social media there is great potential for customers, income and opportunity. This step makes sense of all the other things you are trying to accomplish. The pattern of sustaining my art career is creating the work, talking/writing about my work and sharing it with people. Social Media an opportunity for me to get a return on this investment of time, energy and money. But in order to get the sales and buzz you need to be aware of the common times that people are likely to receive your announcements and invitations.

Since you are going to go the extra step and making time for social media even though it may require another coffee and chocolate chip cookie please note this: if you post at the wrong time your post will be missed by the majority of people. Here's why: each of the social medias brings out a different type of behaviour in the user and so it will dictate WHEN the user will use each type of media. So, Facebook users and Twitter users won't generally use at the same times, so you might want to choose different times to publish your post to these.  Check out the super handy infographic below.

So, in closing, make your efforts pay off and create a well crafted post that is well-timed. Get nerdy about it, measure your results, and get excited because you never know who you are going to reach with social media, and there is something really fantastic about that.