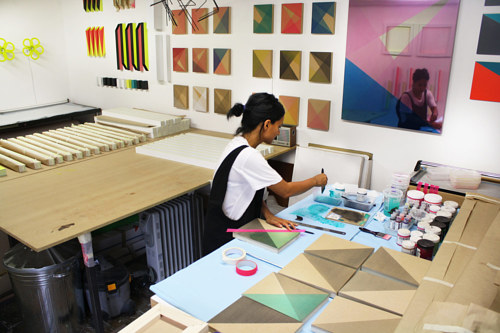 Rana Begum was born in Bangladesh and now lives and works in London, England. The artist is known for her colourful geometric artworks that draw on patterns and shapes found in traditional Islamic art and architecture.

Rana’s studio looks like a very productive space -- It also looks beautifully clean. The artist’s style of working seems to lend itself to a kind of mass production, like the small pieces pictured here that use simple, repeated geometric forms.

In the photo above, it looks like Begum is working on a small geometric painting, using a very dilute wash of paint, using tape to create a really clean coloured line. On the wall behind the artist, a whole series of similar paintings is hanging.

The arrangement of the studio space seems to echo the tight geometric forms found in the artist’s work. It looks as though everything in this studio has a designated place, and the artist is careful to put things precisely where they go. It’s interesting to see this sort of strict organization in an art studio, as they’re often a place of wild, messy experimentation. The artist’s geometric method of working is almost reminiscent of Bridget Riley.

In fact, it seems fitting to compare Begum’s studio space to that of Bridget Riley, as the two artists also share a lot of visual sensibilities. Begum’s work has been compared to art produced in the op art and minimalist movements -- the artist’s focus is on colour, and the interactions between colour and shape on a single picture plane.