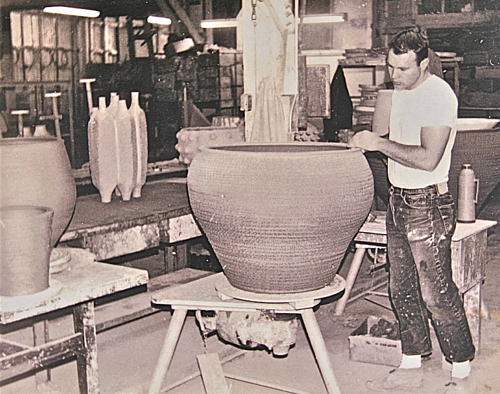 Ceramic sculptor Michael Arntz is our Studio Sunday feature this week! Arntz is best known for creating ceramic artworks on a monumental scale, building artistic compositions from massive amounts of clay. The artist is best known for his monumental artworks that combine architectural forms with those more organically-inspired.

Arntz shares a studio space with Penny Arntz, though it looks like the space pictured above is mainly used for Michael’s ceramics. In the photo above the space looks busy and factory-like, though Arntz is the only person visible in the frame. It’s interesting to see the artist working on such a giant piece of pottery -- I tend to think about this style of pottery on a slightly smaller scale! There are a few other pieces visible in the frame that seem indicative of Arntz’ style overall.

Given that Penny Arntz tends to work in painting, I’m curious as to whether there’s an area of the studio that’s more tailored toward that medium.

Arntz is based in California, where he has lived and worked for much of his life. Along with creating his sculptures, the artist has also worked as a teacher at UC Santa Barbara and as a designer at the Architectural Pottery Corporation. He has exhibited throughout California and the United States, as well as internationally, in Japan and the U.K.